We recommend the ARENA Overview to learn about the main concepts of the ARENA.

Note that the python program can be hosted anywhere with access to the MQTT bus. For simplicity, we will assume that your program is running on your local machine. However, the execution and hosting of programs can be handled by the ARENA itself, using ARTS.

The easiest way to begin programming in the ARENA is to install the Python library and create your first Python program. ARENA programs communicate over MQTT messages which govern all objects and their properties. This library is a wrapper which will allow you to easily send and receive those messages.

Use the Search ARENA Documentation bar at the very top of every page on this site to find examples and information on anything you need.

Create a box and observe

Now, let us create a very simple Python program in the scene example, under the username you defined the first time you entered the arena. Start by opening the scene in your browser and notice it is empty, with default environment settings.

Open the example scene under your arena username by entering the following URL in your browser: http://arenaxr.org/<your-username>/example

Copy the python script below, and paste it into a box.py file. After saving the file, execute the script (e.g. python3 box.py; make sure you installed the python library first).

Looking at the scene in your browser will let you see the box. Watch out, if you are at the origin, the box will be underneath you. 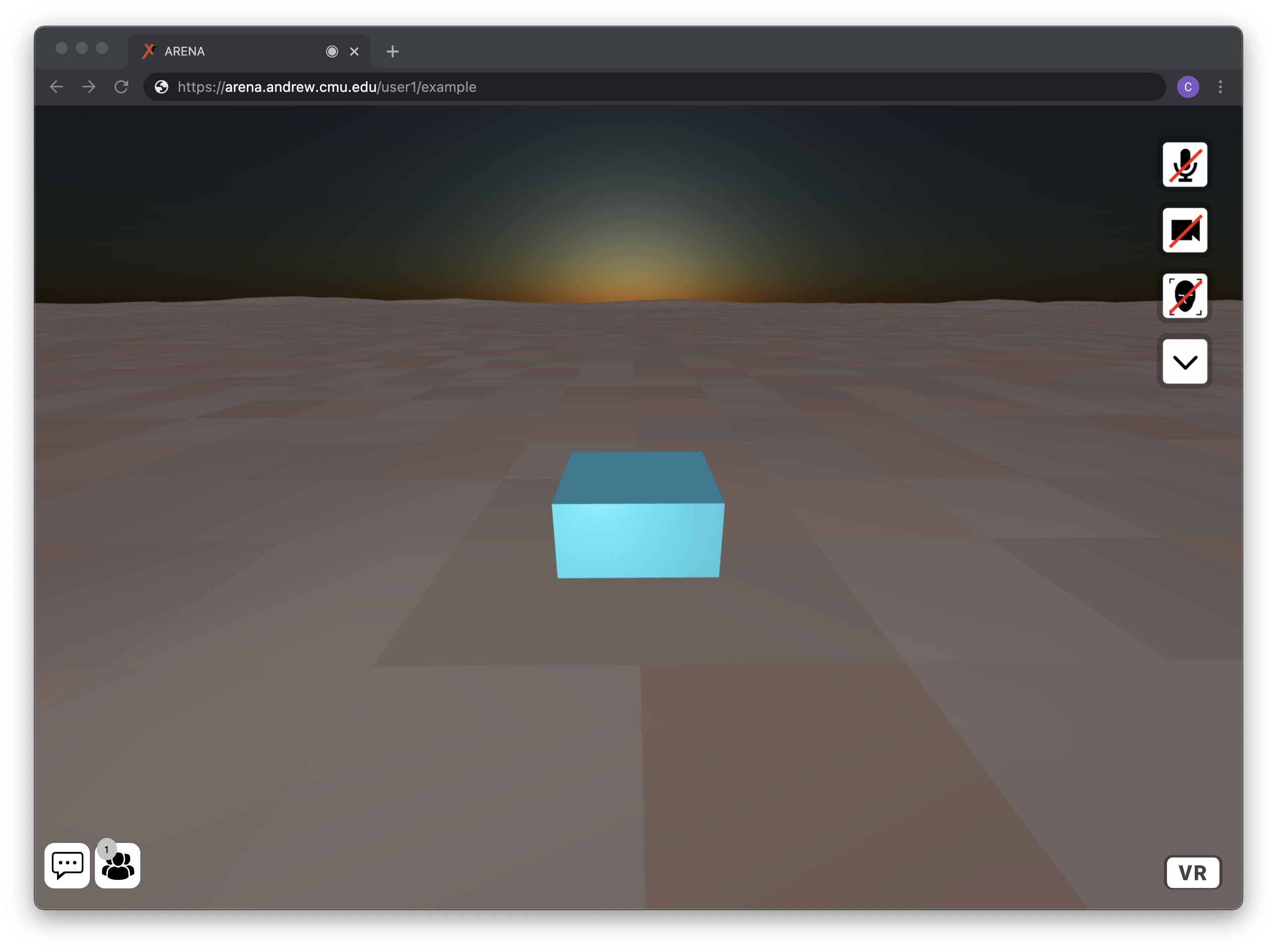 By default, objects are generated in a random color, with no rotation, at x, y, z position (0, 0, 0), and with no other properties applied. Some of the other properties you can add to objects are detailed in our Python Examples. Notice that the box seems stuck in the ground, which is due to the box’s origin at its center positioned at scene coordinates (0, 0, 0). If you enable Flying mode (see User Guide), you can move below the ground plane and view the other half of the box. Type Ctrl-C to end the program.

Once you run the script above, you can go back to the scene example in your browser to see the two boxes:

Running from the Command Line

The target of which server, user and scene are set by the Scene(host="...",scene="...",namespace="...",debug=False) function call. It is also possible to override these using shell environmental variables at the command line as shown below. This allows a simple way to re-target applications for your own environment without having to change the parameters manually in the code.

If not specified the namespace is your current logged in user-id. The most common use-case is to simply update SCENE and MQTTH.

As a web browser user of the ARENA, you are connecting to the ARENA MQTT broker as one client connection, in which you are publishing your “camera” perspective as you move, and subscribing to changes in other objects and other users’ “camera” moves. Every time you run a Python program you are also connecting to the broker as another client connection, in which the above program publishes a message creating a box, and also subscribes you to other users’ “camera” moves, and objects.

Let’s try observing some of those other messages but adding the following code to your Python program. Add the scene_callback function, and also alter your arena.init() call, to accept the new callback and allow you to observe all the messages you have subscribed to in this scene.

Move yourself around in the browser view and notice all the camera updates and positions and rotation changes as you move. This is way too much information to be human readable! However, you can filter out these messages for what you need, or even better, if you only need feedback for a specific object, like our box, as we cover next.

One way to reduce the flood of messages for your Python program is to define a callback specifically for one object, our box for example. Update your program to comment out all messages subscribed in the scene, add a callback just for your box object, and update the creation of your box object with a click-listener and the new box_callback.

Now, in your scene use your mouse to click on the box and notice the messages you receive just from the box. You have useful information like: what type of event - mouse up/down/enter/leave, the owner of the event, the position of the owner, the position of the click. You can use this information to programmatically decide how to respond and begin creating a rich, interactive, 3d experience for your users.

A more advanced manipulation of objects in the ARENA is using 3d models as GLTF. Here we are going to use a GLTF model of a duck and some animation rules to make it rotate.

At your leisure, read more about methods to generate 3d content and animate objects and models. 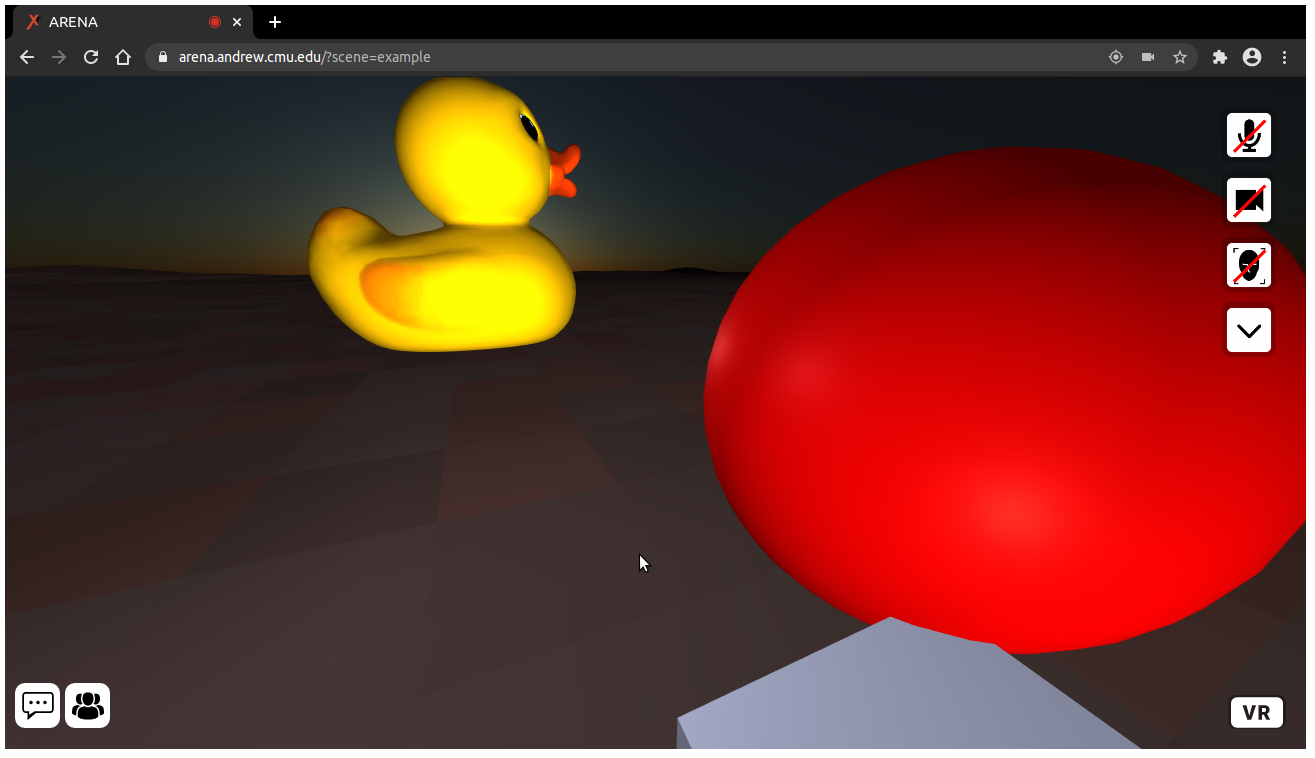 Up until now, everything you have created has been non-persistent. That is, objects are only rendered in real-time for any browsers open to the example as MQTT messages are received. So, if you refresh your browser, notice that all the objects we created are gone, new visitors to this scene will not see them. To backup your scene objects into our persistence database you will have to specify persist=True in Python definitions. This is also true when ARENA objects are created in other scenes. The underlying message needs to specify if the object state is to be persisted or not.

Go back to the previous python code and try to add persist=True to the duck object:

If you run the program again, you will notice that the duck remains in the scene, even across a refresh.

Since the ARENA’s rendering uses the A-Frame web 3D rendering engine, you can open the A-Frame Scene Inspector on any scene to examine and manipulate any of the A-Frame elements in your scene. Try this now from your example scene by typing <ctrl> + <alt> + i on most systems.

Examine the list of elements on the left side. Each element or object you select will show it’s details and attributes on the right side. You may edit any attributes here you wish, however, remember that the A-Frame Scene Inspector will not persist any changes to the persistence database. We do have a way to visually manipulate objects and save changes that we will share next. 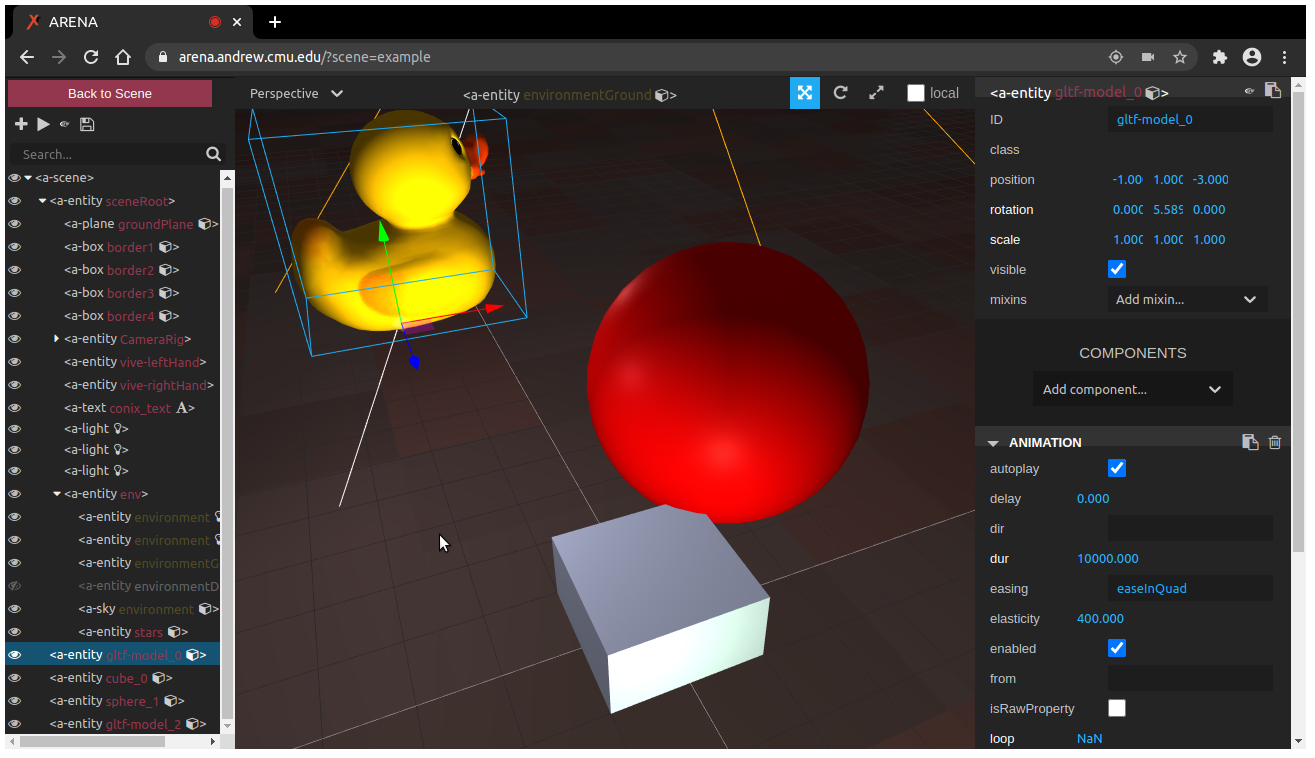 We also have a Python program, AR Builder (ARB), which you can use to create and edit objects for your scene. You can use it in VR (virtual reality) as a way to edit your scene and save changes to the persistence database. Importantly, you can use it in AR (augmented reality) in combination with supported browsers and localization techniques to anchor scene objects in physical space. See our section on miXed Reality (XR) for details.

Check out the Platforms Section for details on browsers and platforms that support XR in ARENA.

In either case, ARB allows any user in the scene to edit, so it can be used collaboratively by multiple users remotely as VR, in person as AR, or as XR (miXed Reality), a combination of both.

Back: Panoramic Rooms
Next: Next Steps