We recommend the ARENA Overview to learn about the main concepts of the ARENA.

We will now do a quick tour of a simple interface to edit ARENA scenes. We will see how to create a scene and add some content to it.

Head to the build page (in a new tab). If you never created a scene, it will look similar to this:

You might need to sign-in to use the build webpage. The conix in the upper right corner and in the User or Organization select is the username we used to login for this demo. Your username should appear there.

As indicated in the Scenes select, your user has no scenes. Let us add one by pressing the button (highlighted with a circle in the figure above). This will pop a dialog to create the new scene as follows. 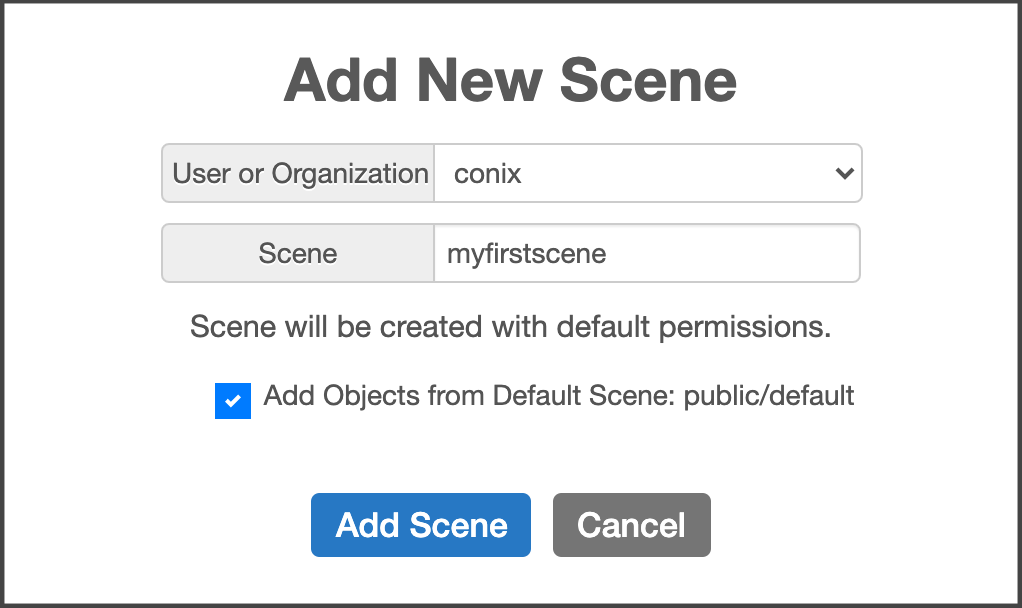 It is likely that you only have access to your User/Organization, so the first select will have only your username. Enter the name of the scene in the Scene input. You also have the choice to start your scene with some objects copied from the public/default scene. It is a good idea to do this, so let us leave it checked.

Once you are done, press the button, which will prompt a ‘Create Object create published’ popup message in the corner. The popup will disappear in a second. Let us take this time to have a look at a few other sections of the build page shown below. 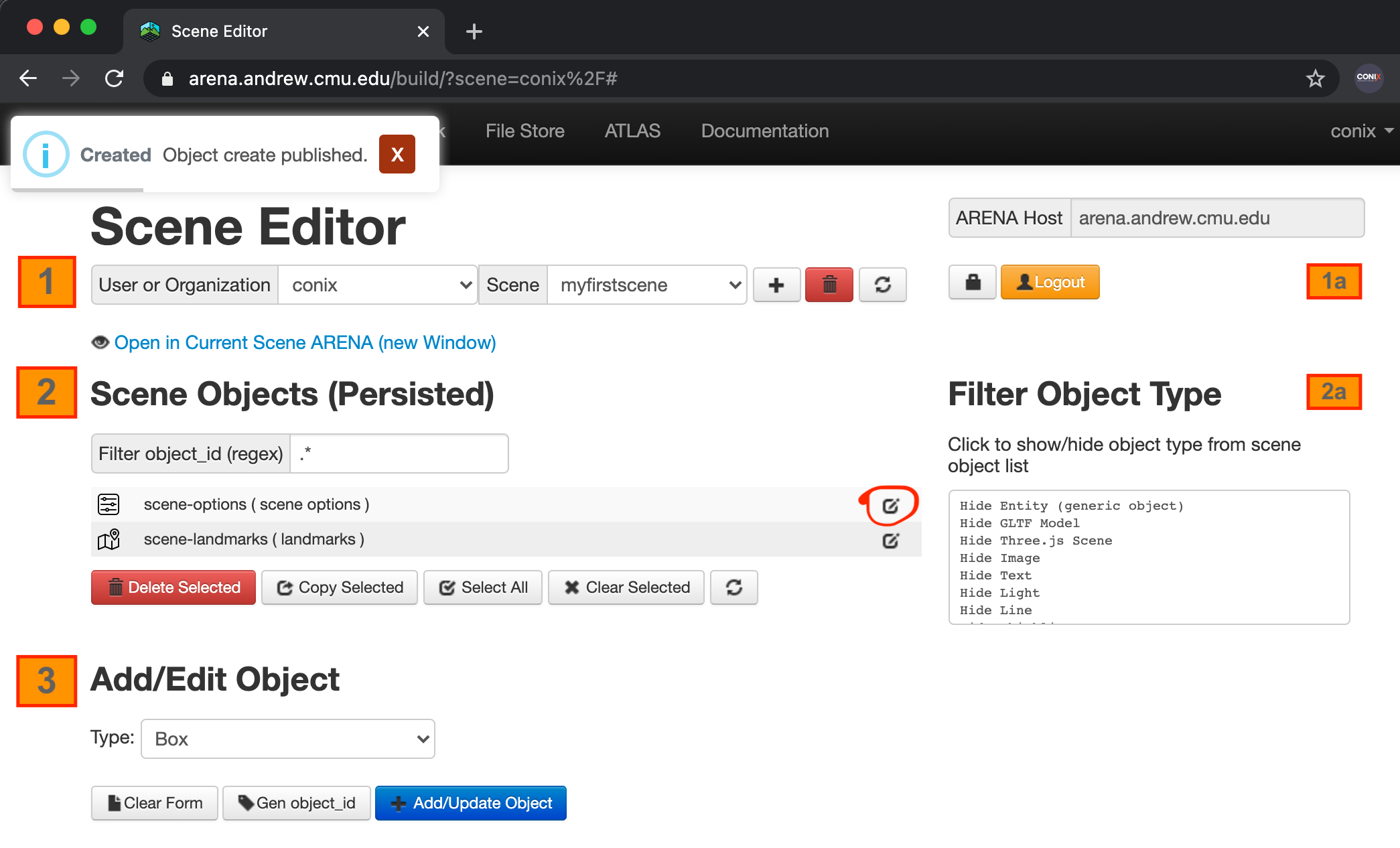 Because we let the ‘Add Objects From Default Scene’ option checked when creating the scene, it has an object already (your current ARENA instance might have even more objects in the default scene): a scene options object. We will play with this in a bit.

In the figure above, we numbered (orange boxes) the following sections of the page:

Let us see the Scene Objects and Add/Edit Objects sections in a little more detail now.

Notice that, because we let the ‘Add Objects From Default Scene’ option checked when creating the scene, the scene list is now populated. If you did not check the option (or your setup does not have objects in the public/default scene), don’t worry; come back to this section later, after you know how to add a scene options object to the scene.

Press the edit button of the scene options object (if it appears in your list):

This will trigger a popup in the upper left corner indicating that the object properties were loaded into the form shown in the Add/Edit Object section (the popup will disappear in a few seconds).

You can now edit the object properties. When we are done editing the object, we can press the button to trigger an update.

Below you have an example of how the entire Add/Edit Object section might look like after loading the scene options object. The Type select shows the type of the object being displayed. The ARENA has many object types as you can observe by opening the select. Most of the object types are 3D Objects, such as spheres, boxes, or GLTF models. There are also a few other object types to, for example, configure scenes (scene options) and to add programs to scenes.

Under the Type select you have some buttons to (for example, if you want to add a new object), to create an object identifier (some objects, such as programs, require long, unique identifiers), and the button to trigger an update of the object.

Notice the Object JSON on the right, this is a text representation of the object being edited in the form. All objects in the ARENA have a JSON representation. As you edit the form, the JSON will be updated. You can also edit the JSON directly and use the to reflect those edits back to the form. The Validation below will output any validation error detected in the object.

Have a look at the form. We will look closer at the sections within the form below, which are mainly defined by the object type (in this case, scene options). 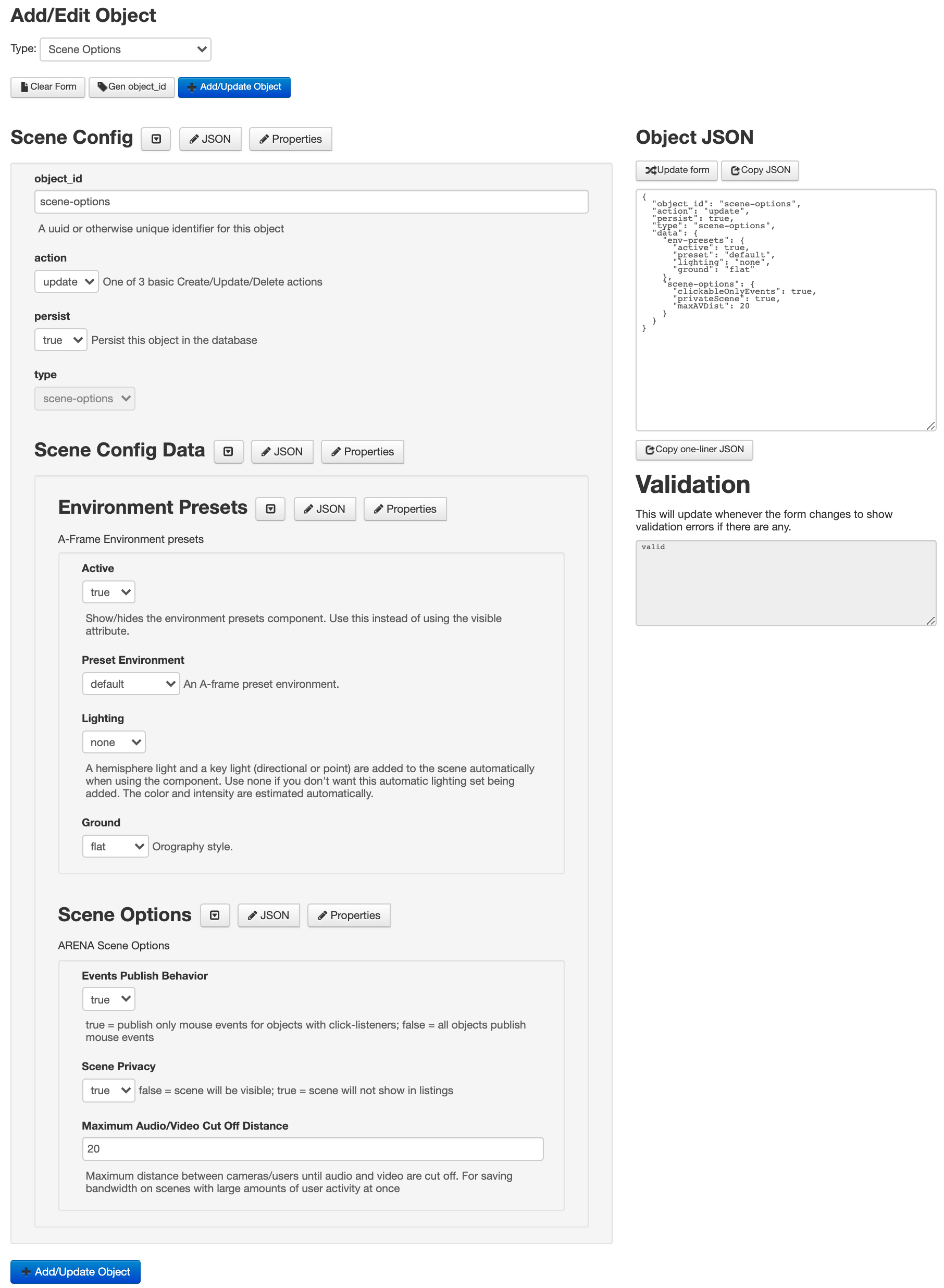 The first 4 properties of the form (object_id, action, persist, type) are common to all ARENA objects.

Note that the persist property defines if the object state is to be persisted, or not. In case persist=false, the object will not be added to the object list (Scene Objects section). The update (triggered by the Add/Update Object button) will only be seen by current observers of the scene, will be lost once they leave or reload and will not be seen by observers joining the scene after the update.

A scene options object allows setting options for a preset environment in the scene, set some scene options (such as audio range, publish behavior, or scene privacy) and define some renderer settings. The properties that appear on the form (and, therefore, the options that are available to be configured with the object) can be set with the button. Notice the 3 different sections of the scene options object:

The checkboxes allow to hide/show those subsections (in reality, these are objects themselves) of the top-level object (scene options). Notice that each subsection has its own button. For example, the environment presets:

Feel free to add properties and set their values to see their effect in the scene.

Later, we will add a nice model to our scene. To prepare the scene for it, try to set the environment preset to forest, add a point light to the scene at 0, 5, 0 (x, y, z), and set shadows to true: 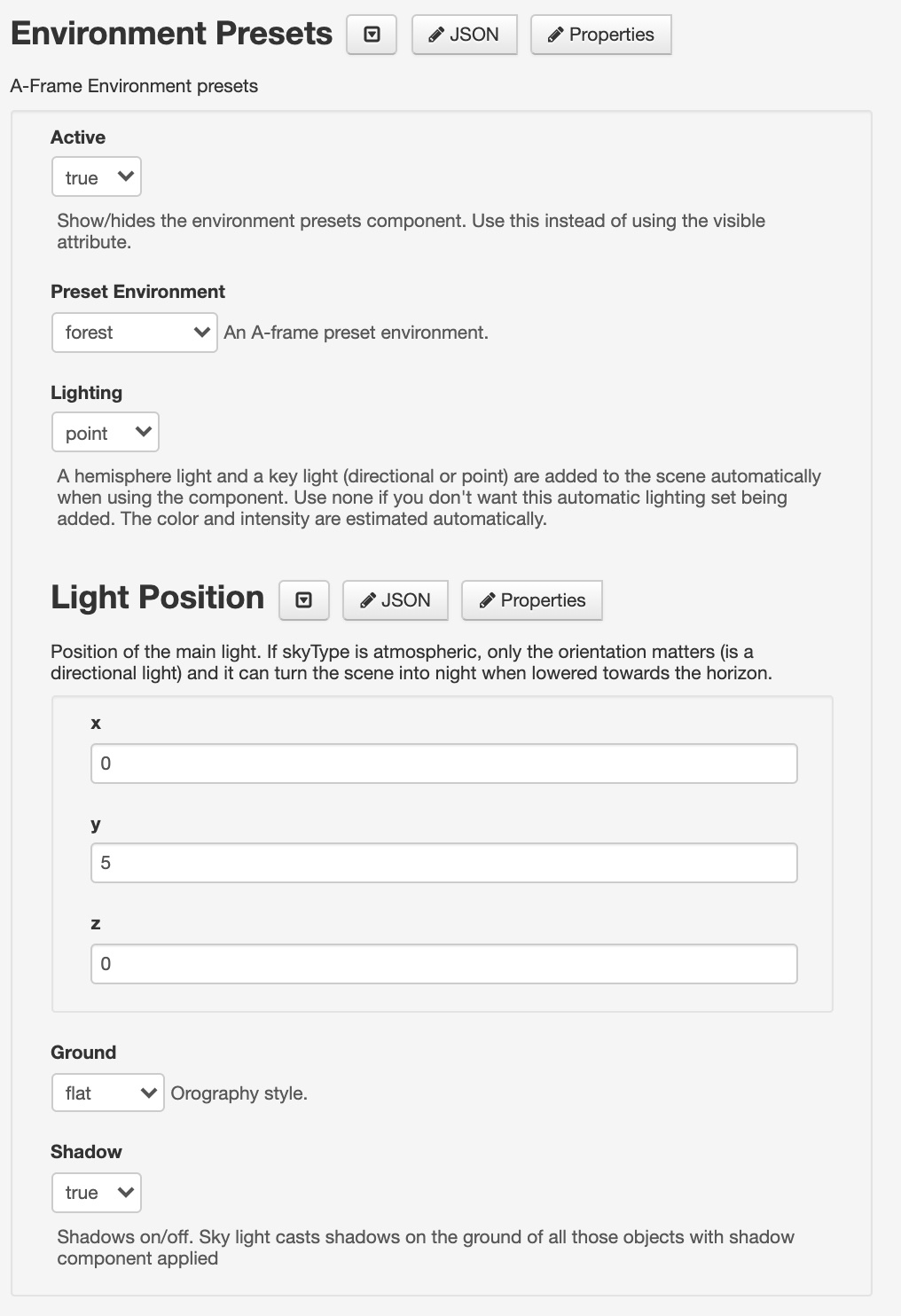 The order of the fields might be different for you (depending on the order you added them).

After making the edits, update the object by pressing the button. You will have to reload the scene to have the new scene options applied.

Contrary to most objects in the ARENA, most scene options require a scene reload to take effect.

Let us try to add a new object to our scene. We will add a GLTF model of the Mammuthus primigenius (Blumbach). In order to use it in the ARENA, we uploaded a .glb copy to dropbox and shared it publicly: https://www.dropbox.com/s/pgytn552kzukm8f/blumbach.glb?dl=0.

Why Dropbox? ARENA internally converts dropbox share links into dl.dropboxusercontent.com, which currently allows the ARENA to use the content hosted at dropbox due to Cross-origin Resource Sharing.

When using downloaded models, please make sure that the author is properly credited.

Start by selecting the GLFT model object type from the Type select at the top of the Add/Edit Object section:

As you select the GLTF model, the form will change to the default properties for this object type. Let us edit the form and enter:

In order to have nice shadows from our model, add a shadow property to the GLTF model:

And enable both cast and receive shadows:

Update the object by pressing the button. Now, if you open the scene in your browser by following the link at the top of the page:

You should have a magnificent Mammuthus primigenius (Blumbach) in your scene! 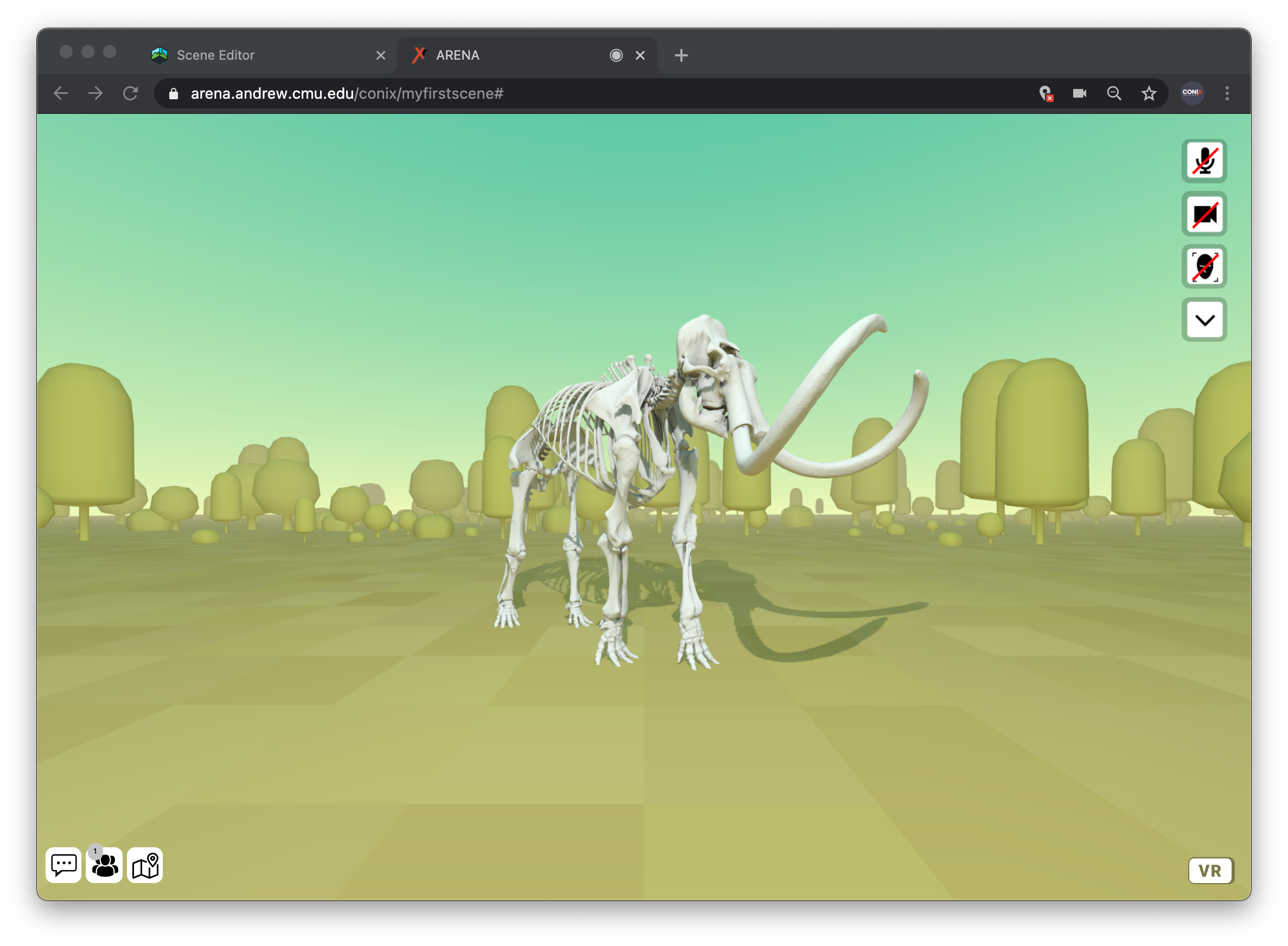 Other object types (3D objects, scene options, landmarks) can be added in a similar way.

Landmarks allow you to jump to certain places of interest in a scene. If you copied the landmarks from scene/public, it is likely that you have a single landmark pointing to a Screenshare: 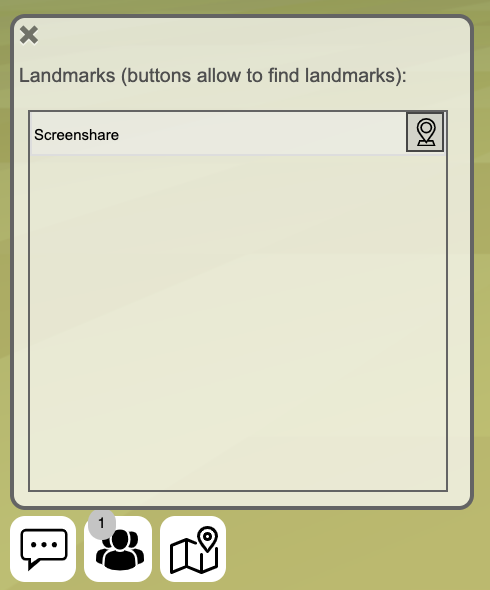 Let us add a landmark to the Mammuthus primigenius (Blumbach) model. This way, wherever we are in the scene, we can quickly jump to be near it. Start by selecting the existing Mammuthus object from the list.

Update the object by pressing the button.

Under the GLTF Model Data section, click on the , and check/add the Landmark property. Add the label “Mammuthus primigenius (Blumbach)”. 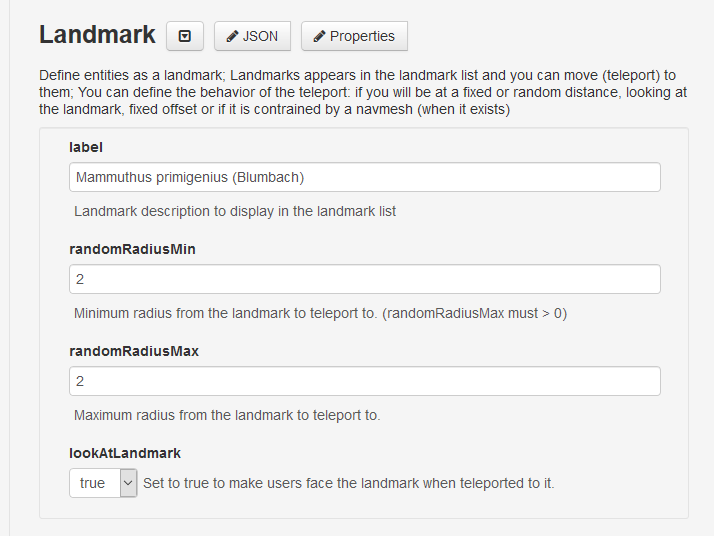 The landmarks list will automatically update once this property is added.

Now in the landmarks list and press the ‘Mammuthus primigenius (Blumbach)’ entry.

You can control the distance and/or position you are placed from a landmark in the landmark properties either with a randomRadiusMin and randomRadiusMax, or an offsetPosition. Otherwise, you may be placed in the middle of the object! 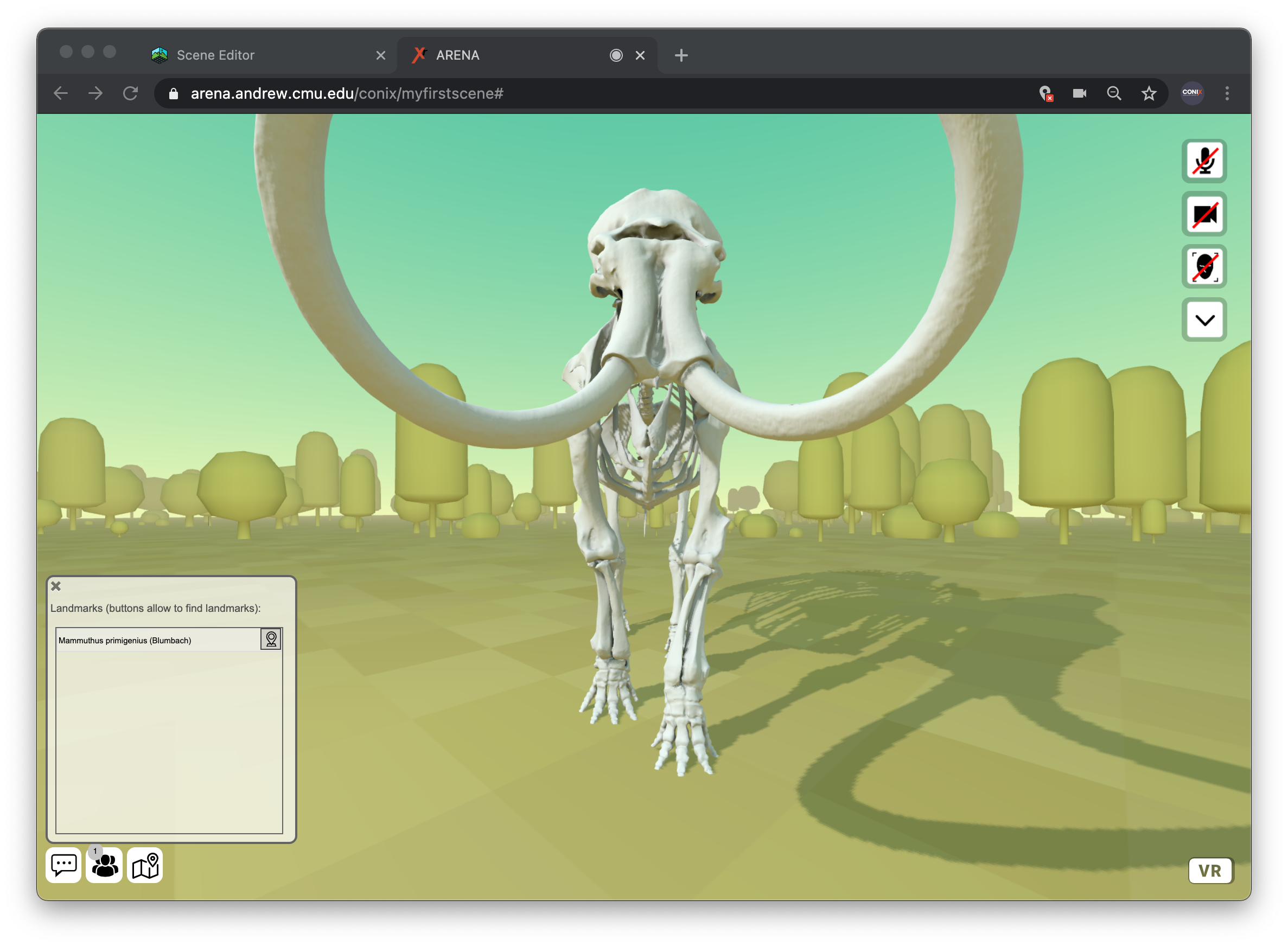 In an AR device (e.g, an AR headset or a tablet or mobile phone with passthrough AR capabilities), you can press the button at the bottom left (the AR button is not visible in devices that are not AR capable, such as a desktop). It will initiate an AR session where the background environment is hidden when entering AR (this is the default setting, but might vary depending on the configuration of your scene).

Icons made by Smashicons, Freepik from www.flaticon.com

Back: Quick Meetings
Next: miXed Reality